We’re running a training programme at The Story Museum in heritage story skills. Fourteen adult volunteers, aged from 18 to 65, who are not currently working or studying, are taking part in the 12-week course, which has been made possible with support from Heritage Lottery Fund. They are from a variety of different backgrounds but all have a love of stories, history and Oxford.

They’re learning to become story guides and as part of their training, they’ve been visiting some of the city’s famous museums and landmarks and exploring their connection with three of the world’s best-loved fantasy writers, CS Lewis, JRR Tolkien and Lewis Carroll.

They’ve also been learning storytelling skills with professional storyteller Chris Smith, who is also our outreach director. One of the course members, Patricia, was so enthused at the end of one day that she re-told a story to passengers on the bus going home. Seated next to a woman who said she’d had a terrible day, Patricia replied: ?I’d had a fantastic day, and started to tell her about it. That led on to the story of the Freedom Bird, from Asia, which we’d been working on earlier, and people in the seats nearby asking me to speak louder so they could hear.?

The volunteers have been hugely enjoying the course and are planning a celebration event when they’ll have a chance to show off their skills before giving some tours to the general public.

As part of the Happy Museum project, participants on this training programme have also been given the option to track how this programme has directly affected their well-being.  We have certainly had indications that it has had a very positive impact on their feelings about their city – one participant commented ‘it’s like I’m falling in love with Oxford all over again!’

Who’s here ? even in spirit!

We need to know who’s in the building but, again, we try to avoid the standard form filling procedure. Here’s how we flag ourselves up ? people even customise their own names (Michael Rosen has initial caps, another does a back to front tick. Note the mysterious visitor who appeared  at the bottom of the roster one morning? 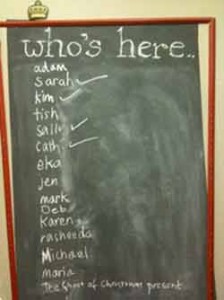