Afsheen Butt is a member of Aik Saath, a Slough-based charity that empowers and supports young people to lead and deliver change in their community. Aik Saath worked in close partnership with Slough Museum on the recent Happy Museum project, Community Conversations. To find out more about this project click HERE.

The three days spent at Rochford Hall have all been a vivid daze I must admit. Just like my first feeling as the car drove up that long drive way, past the many sheep and lambs and quite amazingly brought us in front of this enchanting ‘mansion’! At first I was far too engrossed in the taxi drivers chat as he told us the history of the place were the symposium was going to unravel; Stoke Rochford Hall. He spoke quite enthusiastically about how the place had caught fire 10 years ago and yet was built back to its previous condition in no time- how the owner wanted it to look exactly the same. Little did I know that the surprises would come gushing in throughout the event!

‘The Happy Museum Project looks at how the UK museum sector can respond to the challenges presented by the need for creating a more sustainable future.’

Now for Slough Museum, since I was representing Aik Saath- together as one, the happy museum gave us an opportunity to hold an intergenerational based conversation between the elderly and youngsters in our community. However, I must admit before this I’ve never really had much experience with museums and to be quite frank as a child I used to really not like them. They reminded me of the ‘punishments’ my teachers used to issue for naughty behaviour! So before the symposium I expected to be a little lost and not have enough to say amongst the professionals in the museum sector. However, once we all started we couldn’t seem to stop. The atmosphere was so pleasant as everyone was so friendly and genuinely wanted to hear about each other’s projects. It didn’t matter that I was the youngest there- my opinion seemed to be as important a Tony Butler’s, the founder of the happy museum project! This not only set the mood for the whole event but also subconsciously put me at ease to explore all the ideas and ask as many questions as possible.

As the project started developing and we all started asking more questions I realised a very regular theme between every museum and what the staff from there said. All the different towns and cities are in need of resources but they all seemed to feel that they lacked the platform to be able to utilise those resources. As Martin had mentioned, the things the resources will be used for should “enrich each other.” And how else will that be possible if it wasn’t for the funding that was given to them by the Happy Museum Project. But then how do we make it have a long-term effect after the funding stops?

The conversation took a turn of events as Ester mentioned that the museums “Want to engage with the public but aren’t particularly good at it- they don’t know how to approach it.” This led to a disagreement as the museum staff mentioned that “Universities are the ones that need to think of the change as well as the museums.” It was mentioned how a lot was expected from the museums- more than they can do with the limited resources that they are given. Then the Idea of different individuals getting staffed and being able to have that scope to create a new vision, “Developing capacities for the communities to get involved”, was brought forth which led to a whole different conversation. It was discussed how we need to change the organisational structure needs to be challenged and changed, we need to take a risk to be able to get more involved.

None of us is as clever as all of us in the room.”

After lunch we broke into groups and discussed what we wanted from this project specifically. I got a good idea of what individual museums want to present and how they want to approach their communities. When Carol mentioned that she “believed that museums are capable of anything,” others started saying what they expected to do too. Carrie wants her ‘museum to change peoples lives’, and Sarah said how ‘Leeds wants to become a child friendly city’. A lot was said about how we can measure the effectiveness of the project- with Sian’s perfect quote that explains why we need to measure our success, ‘Capturing the moments from the volunteers before they ‘die’ off.’ However, when we fed back  to the group, something Rupert said really did get me thinking- “what does it deliver that other projects don’t?”

Now since the project is called ‘happy museum’ one can’t help but think what ‘happiness’ actually is. The dictionary defines happiness as ‘a mental or emotional state of well being characterised by positive or pleasant emotions ranging from contentment to intense joy’. It may seem to some people that we are trying to ‘sell happiness’ which is actually quite problematic! It was mentioned how happiness is about giving people the ability and power to make change and do what they want. All these different definitions show how happiness is far too varying, hence all the major differences in the projects and their contents. The people in the room at that moment really showed concern about how they feel the museums image is of ‘last century’ and how we need to try and be as ‘innovative as art or theatre.’ That’s when people mentioned that happy museums are ahead of the game with this which helps smaller the gap between what is said and what is practiced.

Mind set, principles and beliefs are like the roots of the tree. These are the roots that will help us create a desired change! As the presenter of the HappyCity showed us; visit http://thehappycity.com/ to see more of their awesome projects.

The ‘Empathy road show’ really helped us envision a future which is more sustainable. A future built on emotional communication and a way to connect with each other. Follow link for more on the show; http://www.artsadmin.co.uk/events/3398.

The rest of the event consisted of the ‘tipping point’ and concepts on how we can measure what matters. We all led different conversations on how we can bring forth the change and show the politicians and our funders that we are making our future a more sustainable one. We are tying to be the ‘megaphone’ and are not being the ‘mirror, but a hammer that changes the world!” We can only motivate people to empower themselves as we cannot empower them and this Happy Museum project is actually an ethos- not just a mere project! 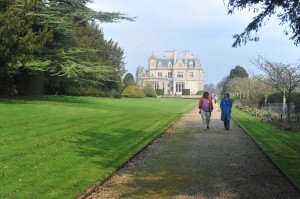