Feb26 Comments Off on Constable, climate change and co-production – a day of Happy Museum ethics.

The General Assembly Room at the Royal Academy of Arts is a decadent chamber surrounded by golden pilasters and magnificent paintings such as John Constable’s the Leaping Horse. Originally a bedroom, then a state dining room, the room was came into its current usage as meeting space for the General Assembly, the R.A’s governing body of Royal Academicians, in the 19th century. However, for one day only on the 18th February 2016 it became a meeting space for a Happy Museum Ethics Committee as we tackled how we- as museum employees, as members of the public, as freelancers and as activists can reconcile our personal values with those of our workplace(s) in order to do what’s best for the publics we serve and for the planet. 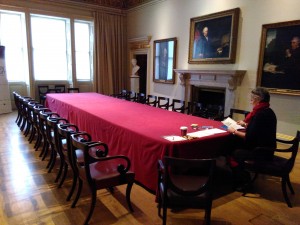 Lucy settling into our surroundings for the day!

The morning kicked off with an introduction from RA Head of Collections and Happy Museum trustee Maurice Davis. We used the art hanging on the walls around us as a spring board for conversations around ethics and access. Ethics are often considered as a professional code that ‘polices’ practice to ensure that bad things don’t happen. However, in the first session of the day we discussed how professional ethics can be often be a mediation between two good things that are often incompatible, such as inviting visitors to feel that tangible sense of age and history that comes with handling a museum object and safeguarding collections from harm. Certainty in modern life is constantly shifting- therefore ethics can act as guiding principles over uncertain ground. Ask yourself- do your actions past the ‘stench test’- how would you feel if you read about it in a newspaper? What would your mum say?

Alistair Brown, Policy Officer at the Museums Association followed up these initial thoughts by introducing us to the new pocket sized Code of Ethics. The new code responds to mounting challenges in the sector from funding cuts to diversity and seeks to be a guide for every day decision making- not just a dusty volume that gets pulled out of a drawer in the face of impending doom.  The new edition of the code re-thinks collections in light of how they are used today for public engagement, stewardship and integrity. After consulting our lovely new codes, we set about working through a number of examples of ethical dilemmas. If you’d like to have a go at these yourself- a list of examples can be found on the MA website. Dilemmas around sponsorship from oil companies to fracking illustrated the complexity of operating as an environmentally friendly institution during a funding crisis.  A key question we posed ourselves was ‘On whose behalf are ethical decisions being made – and who should be in the room to make them?’ 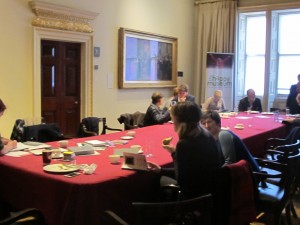 Lots of meaningful discussions were sparked by our speakers

Platform London know a thing or two about the complexity of fossil fuel funding and the arts, formed in 1983 as a place for artists to connect on social and environmental issues, Platform has a long history of holding corporations to account for their unsustainable actions through artistic interventions. Today Platform exists to facilitate arts, activism, education and research and questions the relationships between cultural organizations and oil companies. We were joined by Anna Galkina and Mika Minio from Platform as well as Charlie Kronick from Greenpeace. Mika gave us a brief introduction to Platform’s work and asked to us view company logos as museum objects and ask ourselves- what is the impact of their presence in gallery space? As well as considering what a museum gains from any sponsorship we should ask what a sponsor gains from it’s relationship with the museum. After a long morning sitting in our chairs we then got up and repositioned ourselves in the room to demonstrate our feelings towards accepting funding from a selection of funders based on our own ethical viewpoints. This exercise was incredibly useful as it demonstrated a great deal about our own values and bias and the importance of consulting colleagues and professional codes (such as the code of ethics!) when entering into a new relationship with a sponsor, or when reviewing an existing one. 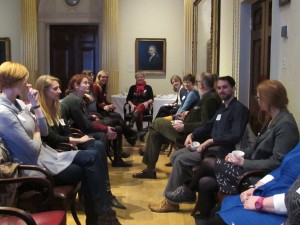 By the end of the day the board table was soon abandoned for a different approach!

The last session of the day was from Jess and Matt Turtle, from the nascent Museum of Homelessness. The Museum of Homelessness (MOH) will be built on the therapeutic community principle and will be created by a variety of people, all of whom will have difference experiences of what homelessness means to them. Ethics and values lie at the heart of the project and we worked with Jess and Matt to consider what MOH should be and what values should guide it. We then considered the ethics of co-production and how to weave individual narratives into an over-arching narrative exploring the history of homelessness.

Reflections as we closed the event included ‘my challenge is navigating many organisations – I plan to focus on making change where I am’,  ‘I plan to codify my own ethics in relation to things I hold true’ and  ‘a better understanding of our influential position and the importance of our ethical stance’.

‘Thank you very much for facilitating such a rich day. I found the sessions and discussions really useful and inspiring.’ – participant