Dec17 Comments Off on Why aren’t we talking about COP21?

“Why aren’t we talking about COP21?” is a phrase I have heard exclaimed a fair few times over the past few weeks. Sometimes it  seems as though there are a lot more people talking about Star Wars than a brand new international agreement to combat climate change. However, discussions happening right now, and this blog attempts to join a few of these conversations up with one and other.

Although I live in Leeds, I was lucky enough to attend the Climate March in Newcastle on the 29th Nov. 641 people took to the streets despite the cold and wind to march. We listened to some fantastic speakers- including 11 yr old Tamin Rahman, local MP Chi Onwurah and architectural historian and broadcaster John Grundy. What was evident from the day was the passion of people from all walks of life for their beautiful landscapes and coastline in the North East, and a strong desire to act now for a more sustainable present as well the future. History was a strong theme between speeches, linking the region’s industrial past with current concerns about fracking. 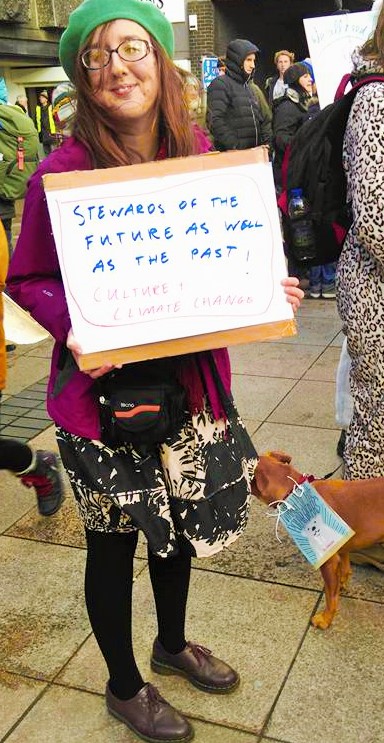 Hilary Jennings was simultaneously marching with me, only she was approximately 248 miles away in London! She was with her local Transition Town, Tooting, who posted three blogs about their personal, community and global reflections. As Hilary says ‘It was hugely reassuring to see so many other people willing to give up a cold and windy day to marching. I didn’t realise till afterwards how many others I knew were there as I spotted their twitter and Facebook posts – and found they must have been only yards from us on the day.’

Since the climate march she has been following lots of reports from people out in Paris. On the Transition Network blog she was particularly taken by Rob Hopkins report of two very different experiences he had at the Solutions COP21 and the Village of Alternatives the short film he took at both make a fascinating juxtaposition of response!

We have also been following ArtCOP21 , a global climate art festival. ArtCOP21 has connected hundreds of thousands of people through an extensive global programme of over 290 major events; art installations, plays, exhibitions, concerts, performances, talks, conferences, workshops, family events and screenings – plus a whole range of people power gatherings and demonstrations – taking place right across Paris and worldwide. You can follow #ARTCOP21 on twitter for the latest updates or delve into their website to find out more about creative interventions on climate change that have been happening across the globe.

Our friends at Julie’s Bicycle were also over in Paris and their twitter feed has had some interesting insights. Julie’s Bicycle presented a letter to Christiana Figueres, Executive Secretary, United Nations Framework Convention on Climate Change and Laurent Fabius, Foreign Minister of France  pledging a commitment from the creative community to take action on climate change. Happy Museum are listed in the COP21 Creative Annex alongside a long list of international partners in the arts who are developing new sustainable ways of working, creating and living.

Julie’s Bicycle are also inviting people to joint them on twitter 13th January 2016, 11.00 using the hashtag #COP21response at 11am (GMT) for a live chat that asks “what does the COP21 Paris climate agreement mean for culture?” You can email them with any questions you’d like discussed.