Jun11 Comments Off on Say it in Clay

SAY IT IN CLAY was a session led by Lucy Neal and Michael Martin from Encounters at the Happy Museum’s 4th Symposium.  The session’s genesis lay in previous collaborations between Happy Museum and Clayground Collective – and in particular a 2015 session where a small group of museum practitioners gathered on a canal boat in Kings Cross for an afternoon investigating and experimenting with the links between museum collections and our relationship with the material world – further investigated in this article by Hilary Jennings.   The conversation had expanded to include Happy Museum Affiliate, Encounters Arts, engaging with a challenge currently facing museums, the decommissioning of objects and pottery fragments or ‘sherds’ in particular.

Their stories need ‘decommissioning’ also. In case of sherds – we don’t always have their stories; story and object have become separated. Clay is a traditional and universal material, found everywhere whilst also being at the cutting edge of new technologies. Such is the incredible longevity of objects made in clay – if there’s something you wish to say to last 1000s of years into the future, it’s worth saying it in clay. 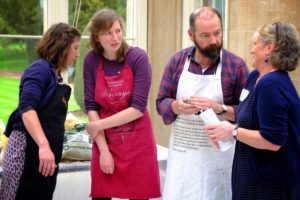 In Stoke Rochford’s beautiful conservatory we had assembled 50 + aprons, teatowels, clay tools along with buckets, sponges, pottery sherds and 8 large (and heavy) bags of school buff clay.  With help from Alice Briggs from Ceredigion Museum and Megan de Silva from Monmouthshire Museums, participants were invited to sit in pairs at tables laid out with materials and tools.

Participants were invited, in pairs, to: 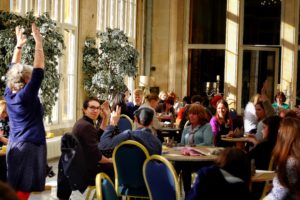 After an energetic 30 minutes of talking, engaging and making, around 25 objects were ready for display in an imaginary Say It In Clay Exhibition which organised itself in minutes on tables pulled together in the centre of the conservatory. Creative making combined with succinct stories and interpretations.  Museum practitioners proved themselves active stewards of past, present and future.  ‘Earth’ narratives were prominent with voice given in the making to the ‘real’ stories of species extinction and human disregard for future generations. 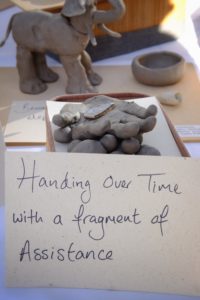 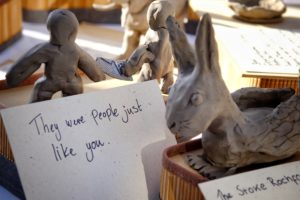 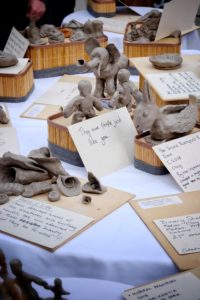 Here are a few of the interpretation display cards

This clay model is the last remaining record of an extinct bumblebee  ‘Bombidrus fragmentus’ driven to extinction by its reaction to telephone signals interfering with its natural communication. The only known pollinator of bananas this food will die with it.

In 1971 a doomed city was built deep in the Brazilian rainforest, San Mort de Necro. This development tragically wiped out the soft-skulled jabberwacky, when 20 birds collided into buildings on a daily basis. By 1994, the bird was extinct. As the bird lived on mosquitos, malaria increased by 2,400% It wiped out all residents. In 2001 the city was empty.

A series of used and disposable cups

Clay is the original disposable material, can we undo the damage caused by transposing this ancient practice into a world with modern materials? 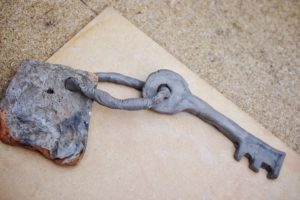 Made byYarls Wood detainee. ‘I need a key to get out of here and a key for a new home’ This person is currently detailed indefinitely under UK Law

Discovered in 2018 in present day New Zealand these clay objects are in fact clay brains. Bamboozled scientists are not entirely sure, but it is believed that they point to the existence of a technologically sophisticated clay-based civilisation whose use of clay was far more advanced than the 21st century’s use of silicon. This discovery paved the way for a clay1 revolution with current clay based technology modelled on the archetypes of these two brains. 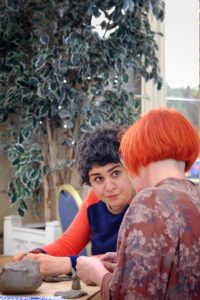 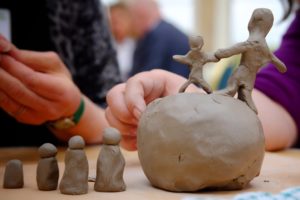 We’d hoped the session would:

We hope the session could lay groundwork for continuing explorations

For more about our collaborators: 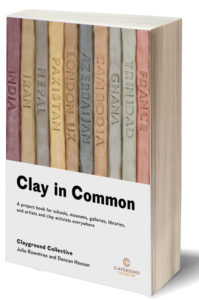 Clayground Collective http://www.claygroundcollective.org and their new book Clay in Common a project book for schools, museums,

Heritage Futures’ Profusion Project (run by Shelley Castle – Encounters Museum of Now) https://heritage-futures.org/profusion/ at Torre Abbey with Dr Jennie Morgan, anthropologist from Department of Sociology, University of York: The Human Bower asking the public ‘What would you keep for the future?’ Encounters Arts