Ruth Quinn explores the links between Happy Museum thinking and her research work at the Victorian model village at Saltaire World Heritage Site.

The Mental Health Museum (MHM) in Wakefield stands on ground that was once part of the allotments at the West Riding Pauper Lunatic Asylum, built two hundred years ago in 1818. 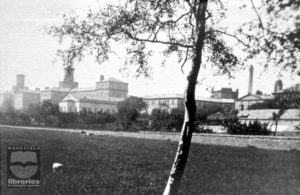 Today herbs and flowers still grow on this land, now in raised planters as part of the MHM’s community garden, The Peace Patio.  The West Riding Pauper Lunatic Asylum can be viewed as a kind of model settlement built to house a community of patients who also acted as an unpaid labour force. The asylum building was designed so that windows offered views of the surrounding country, and the grounds contained gardens, allotments and farm. This pattern of the countryside asylum can be seen repeated throughout the British Isles, and cultivated landscapes were a crucial part the moral treatment model which dominated early nineteenth-century asylum management.

The MHM is now an affiliate of the Happy Museum and serves as a different kind a of model, a model museum – one which uses the often-difficult past of mental health care in Britain to create sustainable and wellbeing focused environments for the future. During my time as Museum Assistant at the MHM I became interested in how landscapes have been incorporated into model communities to provide spaces for food production, leisure and wellbeing. So, when around this time last year, I saw a scholarship was available for a collaborative PhD based at the Saltaire UNESCO World Heritage site, a model village built for Victorian textile workers, I must confess I spluttered my tea in excitement. 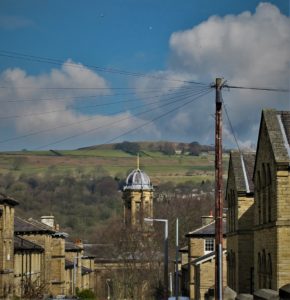 Saltaire has been my home for the past two years and I have become bewitched by the surrounding countryside and how the site functions as a model village. Many descriptions of Saltaire, both historical and contemporary, describe the green and pleasant vistas of the hills which cradle the village, before moving on to discuss other factors, such as the architecture of the village or the business of the textile mill.

However, the landscapes which surround Saltiare warrant further attention, and there is a history written into the hills that is waiting to be explored. Saltaire presents an interesting duality to visitors and residents as it has always been a place where the urban and rural collided. Saltaire is unapologetically urban in design; with its neo-classical towers rising out of the landscape like an Italian citadel rather than a typical Airedale village.

Yet at Saltaire the surrounding countryside created the conditions in which Titus Salt was able to build his ideal village. The location of Saltaire was routinely praised by Victorian visitors as being picturesque and healthy, and a culture of rural and outdoor pursuits such as gardening and fishing was encouraged amongst the workforce. The Salt family also bought up land surrounding the village in nearby Baildon and Bingley, where two of Salt’s sons, Edward and Titus Jr, constructed model farms and estates. Saltaire wasn’t just a site for innovation in worsted manufacture and urban design, the village is also a model which sought to create the harmonious social order of a country village and to improve the health and wellbeing of residents through the setting of countryside environment.

My thinking about model villages has led me to conclude that museums and model settlements have a great deal in common, they are both social spaces designed around a community in a way which has a desired outcome on behaviours, and often both contain models which are used for educational purposes. The key difference between most museums and model settlements is that people don’t tend to live in museums, however when a model settlement like Saltaire becomes a World Heritage Site, it becomes both a museum and a living model village, and this is a very exciting environment in which to test out Happy Museum thinking. 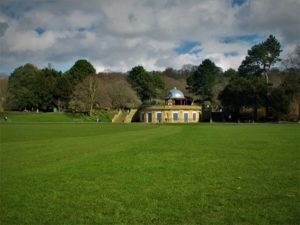 The landscapes that surround Saltaire are as relevant to the health and wellbeing of the local population as they have ever been, and farms, such as Titus Salt Junior’s Milner Field Farm, still operate in the hillsides. By conducting in-depth research into the significance of rural landscapes at Saltaire, my PhD seeks to understand how nature and landscape was used to create the conditions for wellbeing at Saltaire and to start conversations locally about the relevance the landscape continues to have in Saltaire today.

Wellbeing and nature are not just about rural aesthetics – they’re also about access to local food and resources. Local food production in the form of model farms and allotments was a significant part of model village building in Britain. By exploring narratives of agriculture and land use at museum sites which interpret the history of planned settlements museums can act as new kinds of models where people can be empowered to reconnect with their local landscapes and become stewards for the future as well as the past.