Mar15 Comments Off on Building soft power in Reading

Brendan Carr of Reading Museum describes how their Happy Museum work raised the museum’s profile and helped it get involved in shaping the city’s future.

Our first Happy Museum Project commission helped to raise the profile of Reading Museum, which led to the museum becoming involved in the Reading 2050 visioning project as a trusted agency for promoting active citizenship and engagement with communities

Called ‘Revealing Reading’s Hidden Histories’, it was a community history project focusing on highly deprived parts of the town that have a reputation for crime and antisocial behaviour. The aim was to challenge negative perceptions of the Oxford Road, Norcot and Newtown areas of Reading, to explore their hidden heritage, to instil a more positive sense of place. (Read our HM case study here). 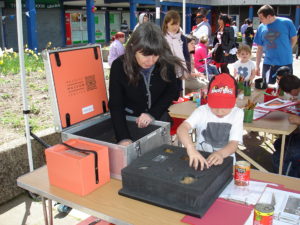 We worked with community members to create pop up exhibitions in these communities and colourful ‘pocket history’ pamphlets, some 15,000 of which were distributed through schools, libraries, doctors’ surgeries, local retailers and public spaces. The Housing Association, Catalyst was also supportive, distributing a free pamphlet to every tenant on the Dee Park Estate. The project made a measurable difference to participant’s wellbeing and was very positively reported by local media and established the museum as an agent worth inviting to be involved in shaping Reading’s future.

We built on this with our second Happy Museum commission: getting involved with Reading 2050 was a chance to see if the museum could leverage its soft power and have a bearing on public policy and particularly policies that changes people’s lives for the better. The Reading UK 2050 partnership (originally formed in 2013) is made up of Reading UK CIC, the University of Reading and Barton Willmore – with involvement and approval from our core funder, Reading Borough Council,

Our idea for the second commission was to create a 15 minute film called Where’s Reading Heading? 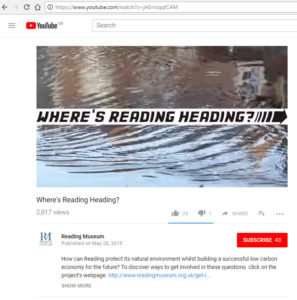 The title plays on the jingle for a well-known local firm called Reading Bedding. The video aimed to conjure up Reading’s past – something the museum is expert in – and then pose questions about the town’s future and its ability to meet the challenges it faces. For instance, we have a growing population and carbon footprint – for its landmass, Reading produces 20 times more CO2 than it needs to. The film is about economic justice and sustainability and it asks how the town will cope with pressures on it.

At a Reading 2050 consultation event, I took the chance to talk to one of the consortium’s leaders, Professor Tim Dixon of Reading University. I pitched to him the idea of the film and we soon had the consortium’s backing for our bid to Happy Museum for funding for this piece of action research. Tim agreed to join a 10-person steering board we set up around connections in the local community and with his help we also won the support of many groups and active citizens within the Greater Reading Environmental Network. We had a budget of £6K and commissioned a local film maker to engage with these agencies, process and make our film, which has an animated historical section, as well as live action footage.

At the launch showing, we gave the audience a questionnaire afterwards, asking them things like: ‘Did your Knowledge of Reading’s heritage increase?’ Around 80% said yes, and 30% said they were encouraged to be more active in shaping the city’s future as a result of the film. The film still has traction more than two years on and is still being shown in schools and colleges. It has definitely increased the museum’s sphere of influence – and we can claim to have influenced the Reading 2050 vision to include a greater emphasis on heritage as a part of the Draft Local Plan

The film was launched in 2015 and the then newly installed Mayor of Reading, Cllr Sarah Hacker used her first official tweet to tell people about it. The film went briefly and locally viral – with a kind of ripple amongst what the RSA are describing as local Connected Heritage systems. The film has had over 2,500 YouTube views to date, including group viewings in school classrooms and at community events.

For me, the film is also a document, a time capsule, a piece of digital material culture created by the Museum at a pivotal moment in the town’s history. As a portrait of Reading today, it will make very interesting viewing in the year 2050, when the UK has committed to have reduced its carbon emissions by 80%.

I am sure that the likelihood of reaching this target can increase through a Transition Town approach to the Global Environmental brinkmanship that’s going on. This is where each town and city and agency within them connects, makes public policy and alters the way in which we steward the local environment. Incrementally this will have positive effect and museums must be active, use their soft power, connect and be part of the solution within their host towns and cities. This can be achieved through local partnership and I am happy to say Reading Museum continues to work on new Social and Eco-justice projects with the organisations and individuals we met through our Happy Museum Affiliate activity.

Happy Museum investments made all this possible. And I want to emphasise that the film is not an end in itself, or a one-off, but part of an on-going campaign to promote local culture and heritage, community wellbeing and also environmental sustainability.