Apr17 Comments Off on Happy Museum – an international perspective

Tony Butler, one of the founders of the Happy Museum project, makes the case for an international affiliate scheme

There’s been international interest in the Happy Museum project since it was first launched in the UK over seven years ago. Since then, as I and others involved have travelled in Europe and beyond, we’ve inevitably been asked about our work, the Happy Museum principles and how are they are being applied.

For me, it has been interesting to see how different aspects of Happy Museum thinking seem to appeal to colleagues in different countries. It seem to break down in a rather surprising way, with countries with strong state support for culture in one camp and countries where funding is constrained, or more diverse, in another.

In Scandinavian countries, which have a strong social democratic tradition and strong state support for culture, I felt there was an immediate resonance with Happy Museum. Countries with progressive political traditions is fertile ground – there’s a good fit with Happy Museum’s focus on wellbeing and environmental sustainability. 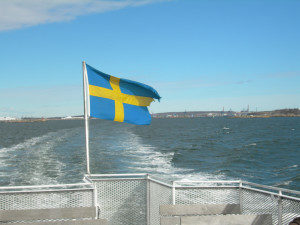 In 2012, I made my first visit to Sweden. I was talking to spoke to The Riksutställningar (Swedish Exhibitions Agency) during Almedalen week in Gotland where for a week in July all the major political parties gather to share policy ideas. I spoke about the wider socio-politcal context of Happy Museum. In this and subsequent trips I gave talks about the ideas of Happy Museum. Sweden has highly eco- engaged institutions and promoting social wellbeing is a priority – and there was a real appetite for Happy Museum ideas around sustainability and wellbeing.

I saw similar resonance with colleagues from countries in northern Europe and across Scandinavia, who I met through the NEMO (Network of European Museums organisations) conferences. There seemed to be less interest from Southern Europe – the exception being Greece, which I visited in 2017. Having gone through financial collapse and deep austerity, there’s an appetite among Greek museum officials for the Happy Museum principles, and for finding different ways to measure success and prosperity.

There’s also been interest in museums in North America around our principles. One of things we talked about in my trips to the US and Canada was the Happy Museum principle around pursuing mutual relationships. There’s very strong civil society in North America that’s different from much of Europe, where culture is more statist and fully funded. In North America, by necessity, museums are connected with a whole range of voluntary groups and charities.

By contrast, in Sweden and Denmark, the Happy Museum thinking around volunteers and community – which we framed in terms of building social capital – was seen as something that could take jobs away from museum staff. Volunteers were seen as a threat, almost.

There’s growing interest in eco-activism in museums in North America, especially Canada, which is the home of the Coalition of Museums for Climate justice, and influential figures including Douglas Worts and Robert Janes, author of Museums in a Troubled World and Museums without Borders. Bob Janes was hugely influential on our thinking as the Happy Museum concept came together, and we have great and valuable connections with his group. They have recently launched a short film which aims to raise awareness and support the global museum community in taking an active role in the fight against climate change.

South America is an untapped terrain for Happy Museum thinking. I was in Colombia in October 2017, at a conference called Re-Imagine the Museum. It felt as though there was a real appetite for change within the museums there, which are often not encumbered by all the structures that exist in big institutions in Europe and in America. In many South American countries, where weaker states have not supported culture, museums have very good links with civil society and the private sector. They have built strong social networks and are more self-sustaining and community-based. In Medellin, the city council are building libraries on top of the infamous rubbish dumps. 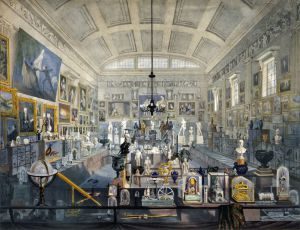 The people I met were aware of Happy Museum, and also about the work we have been doing in Derby – how we are involving local people in developing all our public facing work and how we have opened up the museum to the public to be creative and to help us reimagine the space. There seemed to a good fit with the social and political culture of Colombia, where there is a strong civil society and a weaker state.

Happy Museum thinking on museum’s and environmental sustainability also resonated with South American colleagues. There’s a huge challenge in the urban environments of those countries, where there is rapid urbanisation with no infrastructure. Some amazing things have been done to avoid new settlements becoming ghettos – such as building cable cars to connect disparate communities, or placing libraries at transport hubs. It’s such a different context than we have in Europe – over there they have an integrated approach to culture, transport and society, which we could learn from.

Happy Museum has a very broad approach – and will appeal in places where there’s active community involvement and environmentalism, and a strong civil society tradition. As funding has become tighter following the financial crisis, there’s been a genuine question as to whether growth is the be all and end all. There’s a recognition that we need to build new kinds of museums for the changing world we live in.

The challenges faced by museums in many countries are similar. And from the outset, Happy Museum thinking has resonated in all over the world: museum professionals face questions about how to be a steward the future as well as the past, how to make museums that are places of social capital, how to promote equality and climate justice. There’s a growing body of activism among museums professionals worldwide and a recent Symposium hosted by Manchester Museum bought together a fantastic range of museum practitioners and climate change agencies

Interest has grown steadily and has rasied the question: how much more impactful would our collective efforts be if we were able to connect and share practice, learning and expertise not only within the UK, but with colleagues working in different cultures and environments, facing different challenges and creating new opportunities?

So we’re attempting to map this ever-growing international movement, and we’d like your help! Let us know what you’re doing, or what museums you know are doing, to contribute to social and environmental wellbeing by contributing to our short scoping survey.