There is very positive indication that the Happy Museum project will be the starting point of a process of deepening dialogue with the communities with both the Oxford Road and Dee Park Community Regeneration initiatives keen now to include a heritage strand within future projects.

Hidden history is being revealed and there have been a number of interesting discoveries that would not have been reached but for the work being carried out – Did you know Arthur Rimbaud, the French Decadent poet, lived as a French tutor at 165 Kings Road in Newtown, from August to December 1874. While there he wrote most of ‘Illuminations’ generally considered his greatest work. This is just literally yards from where Oscar Wilde penned De Profundis whilst an inmate at Reading Goal. This discovery is exciting as it is a further element to not just the literary heritage of Reading but also our LGBT community’s history and this may feed into a project being planned for next year. So there are lots of spin offs arising all the time as a result of the Happy Museum project enabling the museum to open up new avenues.

For instance, In Dee Park the Youth Club are getting involved and will be creating ‘History for the Future’ by making a record of life on the estate today. This will include interviews with elderly resident living in the Oak Tree care home. A very good connection has been made with Reading Youth service which we hope can be developed beyond the life of the project. It is entirely possible that the results of the Youth Club’s work can be included in the museum gallery space, ‘In Living memory’, which will be set aside from June for a rolling programme, disseminating a variety of the outputs from the project.

There is observational evidence of happiness being created, and certainly the Orts Road group have enjoyed meeting up in the Fisherman’s Cottage every other Friday to discuss progress and share findings. Overall approximately 60 people are currently engaged with the project at some level. Two further central meetings of all stakeholders are planned. The meeting this month will be attended by Dr Mark Stevens of Berkshire Records office who can offer advice on developing further research into the history of these neighbourhoods. 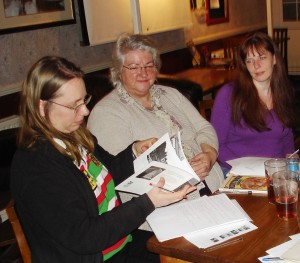 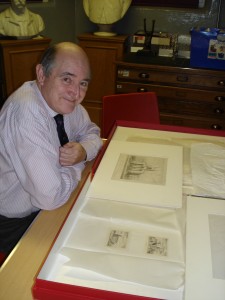 Tom Christie of the Oxford Road Group conducting research at the museum store.