Apr26 Comments Off on Happy Museum Open Workshops 2013 – a report

In April 2013 the Happy Museum Project (HMP) held Open Workshops in Newcastle and Birmingham. Staged in the Great Northern Museum and The Fazeley Studios respectively, the venues providing magnificent settings for a rigorous two days of discussion, presentations and activity. 17 representatives attended the Newcastle event, from organizations as diverse as National Trust Scotland, Falkirk Community Trust and Newcastle Gateshead Initiative. The Birmingham event meanwhile attracted 27 representatives from organizations including English Heritage,  the Campaign for Drawing, and the National Waterfront Museum, along with PhD and MA researchers. The objectives for the days were as follows:

·      Deeper understanding the context of the Happy Museum – bringing together thinking around sustainability and wellbeing.

·      Time for personal and group reflection on some of the biggest issues facing us as individuals and organisations today.

·      Practical examples and case studies from the Happy Museum’s community of practice.

·      An opportunity for reflection on the potential of these ideas for individual and organisational practice.

After an introduction from Tony Butler, Hilary Jennings kicked off proceedings by asking the delegates to divulge “One thing that keeps you well” to their neighbour.  After creating this intimate, yet jovial atmosphere, Mandy then called upon participants to stand on their feet in order to “map yourself against the matrix” of the importance of the HMP mission to the “individual” and their “organization/clients.” Mandy then queried, “What do you want to get out of the day?” before charting the responses on ever-handy post-its. 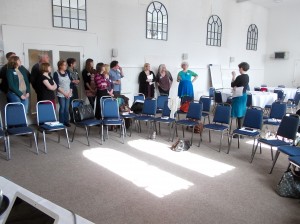 Participants “map themselves against the matrix” in Birmingham 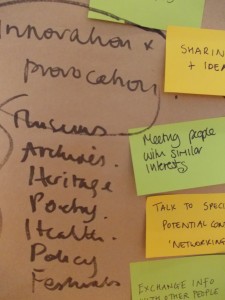 Paul Allen, Director of External Relations at the Centre for Alternative Technology, followed this introduction with a journey through space and time in the form of an exhilarating presentation documenting our increasing dependency on fossil fuels to power cars, roads, and consumerist consumption. Paul continued with a discussion of the environmental effects of these challenges.  He challenged us to consider the prevalence in today’s culture of a dystopian visions of the future and to wonder ‘if we can’t imagine a positive future, we won’t create it’. Taking a more upbeat tone, Paul concluded by stating, “It’s all possible.” This refers to efforts to rethink future sustainable energy use through an embrace of Zero Carbon Britain 2030. 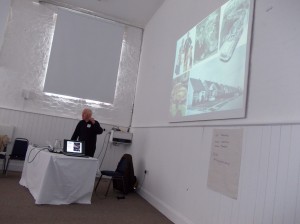 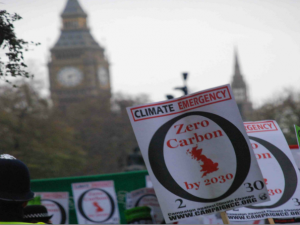 Tony Butler, Director of the HMP, then described the thinking behind the project, its origins in the Museum of East Anglian Life, where we stand now, and the new principles (see image below). Mandy followed Tony with an introduction to the Story of Change and a discussion of how the HMP team use it to evaluate the development of commissioned projects and to Measure What Matters – one of the core principles of the HMP. Delegates were even asked to create their own Stories of Change, responding enthusiastically by chatting with their neighbours well into the lunch break! 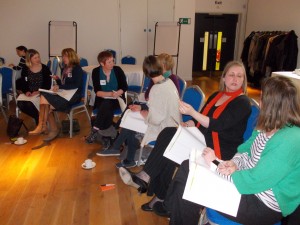 Participants in Birmingham chatting away during the Story of Change activity

After a tasty lunch (sandwiches in Newcastle and delicious chilli in Birmingham), the delegates heard from representatives from the Community of Practice – Alison Pattison of Godalming Museum and Zoe Dunbar of Imperial War Museum North in Newcastle; Mitch Robertson of the Beaney Art Museum, Canterbury, and Rib Davies of the Lightbox, Woking in Birmingham. Those in attendance got the chance to quiz Alison, Zoe, Mitch and Rib about their involvement with HMP as well as their broader museum practice. Issues included: how to work with staff on ‘how do we value success’, the ‘success’ of their funded exhibitions, and the challenges connected to building mutual relationships.

The days neared their conclusion with an exciting activity, which called upon groups of delegates to design their own town with a museum at its core. Directed into action by Hilary, attendees were provided with little information about their town other than the fact that it had a population of 100,000 and was/is the centre for the ceramics industry. Armed with the ever-ready post-its and brightly coloured pens, participants set to work creating a fictional ‘Any Museum in Anytown’, fleshing out its environment with shops, homes, factories, and parks etc. Using NEF’s 5 Ways to Wellbeing, Hilary then asked people to “Identify the challenges to the Town”, i.e. economic, social and cultural contestations. Identifying existing “Opportunities for wellbeing in the Town” followed this. In Birmingham, the format varied slightly as delegates were split in two and asked to take on either community roles or museum roles. As well as having a lot of fun, the purpose of this section was for people to have a sense of ‘ownership’ over their town and its museum. Ultimately, HMP asked,  “What does the community want from a Happy Museum/What could a Happy Museum do with its community?” 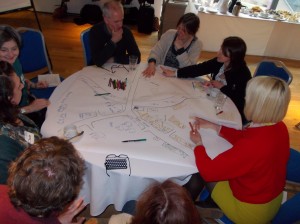 The days ended with an update from the HMP team regarding the publication of Dr. Daniel Fujiwara’s research, Clive Ardagh’s soon to be released HMP film, and the announcement of new funding and a third Open Fund for Commissioned activity. Mandy and Hilary posed questions to the group regarding their opinion on the future of the HMP. Mandy then returned to the “What do you want to get out of the day?” query posed in the morning, inviting attendees to reflect critically on their feelings towards the HMP. Exciting days of engagement and insight (not to mention copious amounts of tea and cake), the Open Workshops proved that the Happy Museum message is spreading far and wide, all aided with the support of a growing cohort of interested parties from across the cultural sector.