Dec06 Comments Off on Values for stronger communities – new resource

Research shows most of us care deeply about one another and the world around us, valuing things like equality, community and friendship. However, the large majority of us underestimate the extent to which our fellow citizens care about these things – and it seems that this misperception is holding us back both individually and collectively.

Cultural organisations are uniquely placed to engage the public and, at a time when societal divisions can seem particularly stark, the need for these organisations to encourage community cohesion is heightened. The new guide ‘Discover and Share – Ways to promote positive values in arts and cultural settings’ from Common Cause Foundation is a valuable resource to professionals in the sector who are keen to play a powerful role in enabling public expressions of concern about social and environmental challenges.

This guide draws on learning from a year-long collaboration between Manchester Museum and Common Cause Foundation, inspired by the work of the Happy Museum project. The project developed new approaches to modeling ‘compassionate’ values in interactions with visitors, volunteers and staff; and found novel ways to facilitate visitors in exploring one another’s values.

“We have an opportunity to convey to people the simple truth that most citizens care deeply for other people and the places that we live – much more than we currently imagine. Cultural organisations can show the way in beginning to communicate this truth – and Manchester Museum has begun to work in this way. But this is a good-news story that can and must be told by many other organisations.”

In 2017 Happy Museum held two workshops investigating the role of museums in our apparently divided society.  Initially arising from the polarisation of the European Referendum, the workshops in Derby in February and Manchester in November considered the psychology and neuroscience behind societal divisions and investigated the particular role of museums and cultural organisations in building empathy and connection.  Hilary Jennings, Director of The Happy Museum, highlights the important role of values-based change agents

“The Happy Museum project encourages museums and cultural organisations to become stewards of people, place and planet. As places and agents for change they can nurture resilience amongst their staff, volunteers, communities and wider society. Understanding values plays a key role in this. Illuminating and modelling shared qualities of empathy and compassion helps build communities of active and engaged citizens.” 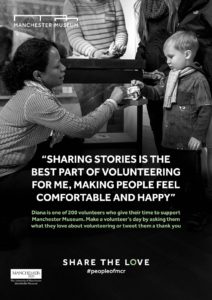 Arts and cultural organisations can play a crucial role in conveying a more authentic understanding of what people truly value, and working in this way has potentially transformative consequences in strengthening communities, deepening people’s tolerance, boosting wellbeing, promoting civic participation, and encouraging action on social and environmental challenges.

Tom Crompton, a Director with Common Cause Foundation, said:

“We misjudge others in our society – tending to underestimate the care that they feel for other people and the wider living world. We live in an increasingly commercialised world, which often encourages us to see our fellow citizens as less caring than they really are. But arts and cultural organisations can play a crucial role in redressing this misperception. We hope that this new Discover and Share Guide can help museums and cultural organisations to deepen our collective appreciation of what people typically value – thus enabling action in line with these shared values.”

A national survey, conducted by Ipsos-MORI for Common Cause Foundation, found that citizens believe arts and cultural organisations could go further in modeling and encouraging compassionate values. The new Discover and Share guide supports this desired process.

The guide is available via https://valuesandframes.org/downloads/