Reading Museum’s Happy Museum commission has deepened our dialogue with neighbourhoods in Reading. With the support of Neighbourhood Action Groups (NAGs) we have made contact with residents in areas of Reading blighted by high levels of crime and scoring poorly in social indexes of deprivation. Participants have explored the museum’s collections and delved into archives to research their history. Regular informal meetings in pubs, homes and community centres have made the project a very social activity and, most importantly – Fun! The results are now being translated into graphic pop-up displays and literature which we will now share with the wider community.

Conscious of the museum’s need to take a lead on sustainability, publication arising from the project uses paper complying with Forestry Stewardship Council (FSC) standards; every sheet can be traced back to its source, ensuring the responsible husbandry of forests.

Part of our mission has been to promote active citizenship and so it encouraging to see participants already lobbying local councillors about the possibility of using community heritage and history in re-generation initiatives. Members of the Orts Road group recently set this out in a statement reflecting upon their involvement with the Happy Museum.

“Undertaking research into the historical narrative of this area has empowered us to see the area with a historical perspective. Households have much of what they need for achieving a greater sense of well being and happiness and all that is lacking is social support and shared activity. The Happy Museum activities have brought some residents out and perhaps this could be a starting point”

By tracing the history of these places from the earliest prehistoric times, right through to the present day we place perceptions about the challenging present within the context of a much longer history. By doing so we promote a notion that difficult moments pass and the future is something we create.

Interesting discoveries about the past have been made along the way.  Did you know that about 90 million years ago the whole of Dee Park was covered in a warm shallow tropical sea? This was home to microscopic plants called “Coccolithophores”. It is their fossilised remains that make up the chalk deposits found beneath the layers of sandy clay for which the area is well known.  A lot of this clay and chalk was excavated in the 19th century by S&E Colliers Ltd to build Reading‘s familiar red-brick terraced homes.

It was also very interesting to find out about the long tradition of community campaigning by people living in Dee Park. In the early 1970s a group of young mothers got together to open Reading’s first purpose built children’s centre on the estate. During the 1980s members of the community successfully campaigned for the demolition of the Bison flats on Tay Road which were unfit for living in.  Dee Park campaigners were also the first in the South East of England to successfully lobby for an Anti Social Behaviour Order (ASBO) to put a stop to persistent disruption caused by a small number living here. More recently, largely as a result of the community regeneration action group (CRAG), a new program of building work and regeneration is underway, to make the future prospects of Dee Park very hopeful indeed.

Much earlier than this we discover that in the immediate aftermath of the Second World War, a group of squatters took up residence in abandoned huts on Rhaniket army camp, which then existed on the site. It was their protest against the shortage of adequate houses in Reading that would eventually lead to the building of the new housing estate. This was opened by the Duchess of Gloucester in November 1969. 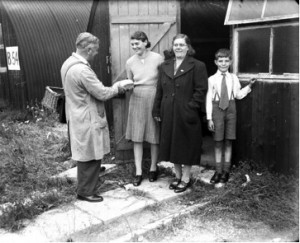 From 1946 some 200 people occupied old army huts at Ranikhet Camp due to housing shortages. Here a young mother receives a delivery of fresh bread from the nearby Grovelands bakery

As Dee Park goes through the next phase of its history it is important to try and capture some of the changes taking place – to make history for the future! As part of this, the museum has added the first edition of Dee Park News to its archive collection. We were also very pleased to commission a local artist called Kate Lockhart to make drawings of buildings, including the Fire Station and the Lyon Square precinct.

Some of the children who visited the museum stall at last month’s Dee Park Wonderland event got involved in colouring the drawings and the results are absolutely beautiful. We also asked young people to take photographs of the changing landscape using disposal cameras. These will become part of a growing body of evidence which will show tomorrow’s historians that Dee Park’s heritage is something to be very proud of.